Our theme this year „Europa w budowie – Europe under construction – Baustelle Europa” poses the question: What is the current state of the European project? How stable are the fundamental common values such as the spirit of reconciliation and the intellectual legacy of the democratic opposition in Central and Eastern Europe? 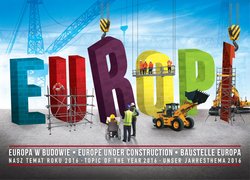 How can one design shared spaces for the exchange of memories and views, in which the diverse stories and experiences of Europeans can be reflected? Will the renovation of the political project of an ever-closer Union succeed, in view of new borders, wars and nationalist tendencies? And what contribution can be made by educational projects and encounters so that people can participate in shaping social and political developments?

Krzyżowa is a project of citizens who devote themselves to European integration, borne from the historic overthrow of communism in Central and Eastern Europe. In 2015 new cracks have arisen in Europe: An increasing economic division makes people doubt whether the EU is more than an economic community. New walls and the increasing need for demarcation amongst each other and towards refugees and migrants characterize the continent. Against this background, we invite you to reflect on the European project anew and to think further: Europe as a cultural and political space which can be developed and changed by the diversity of its people - and in which new answers are produced for the world of tomorrow.

To this end, during 2016, projects will take place on the following subjects: Human Rights & Contemporary History, Sustainability & Intergenerational Dialogue and Inclusion.