"In-Between?" brings together students from four countries across the borders

From 4th to 11th of September students from Germany, Poland, Slovakia and Ukraine take part in the cross-border summer-school "In Between?". They deal with (re-)encountering the cultural diversity and multiethnic societies inside the regions along the borders. 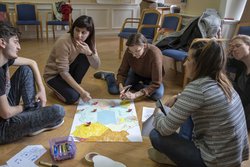 The participants conduct interviews with contemporary witnesses and create a podcast about the specifics of the visited border region. The project is hosted by the European Network of Remembrance and Solidarity (ENRS) based in Warsaw.

This year's sixth edition of "In Between?" is themed "Neighbors Meet in the Border Region." Participants from four countries will be divided into three binational teams and discover cities and landscapes in the German-Polish, Polish-Slovakian and Polish-Ukrainian border regions on a study trip. During a one-week stay, the groups develop the script and make recordings for a podcast about the history and life of the inhabitants of the visited region.

The Kreisau Initiative is co-organizer of the project, which is funded by the Foundation Remembrance, Responsibility and the Future (EVZ).